The Hauberk (from Old French hauberc, Old High German halsberc, Old English healsbeorg, from heals neck + beorg protection, shelter) is a mail shirt reaching at least to the mid-thighs with a mail full mail sleeve. Mail is the quintessential armor of the ancient and medieval world. Mail was made of interlocked wire rings to form a metal mesh. Mail was a primary defense before plate armor. Used to protect against cuts it was worn over a padded gambeson. The padding of the gambeson was used to dissipate the force of a blow. A typical shirt consisted of about 30,000 rings butted or individually riveted and might weigh about 16 or 17 pounds. It is more flexible than plate armor but is heavier for the wearer because all the weight is suspended from the shoulders. To make mail, the armorer drew metal into wire, coiled the wire, cut the coil into individual links, and then wove the links together knitting the mail. Numerous different methods of linking the mail links existed throughout different cultures from Western Europe to Japan. The individual links were either flattened on the ends and riveted closed, or simply pressed together (called butted mail). Time consuming to create, full mail armor often took hundreds of man hours to complete. Worn by Norman Knights at the Battle of Hastings as well as Crusaders. Mail was the armor of Knights and Nobles until the transition to plate armor in the high Middle Ages, though it was still used to fill the gaps between plates. Mail continued to be used by the common soldiery as armor workshops at this time began to use a production line method as opposed to individual craftsmen thereby reducing the cost. Our Hauberk is made using the European 4 in 1 ring pattern (where each ring is connected to 4 others). Made of butted steel rings to reduce cost the shirt is blackened to protect against rusting. Worn with a mail coif, Padded gambeson, and mail chausses you are protected from your enemies. Suitable for impressions from Viking through Medieval Knight and common footman (8th 14th Century). 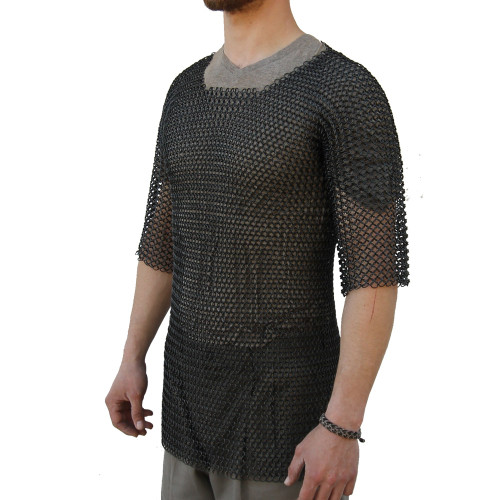 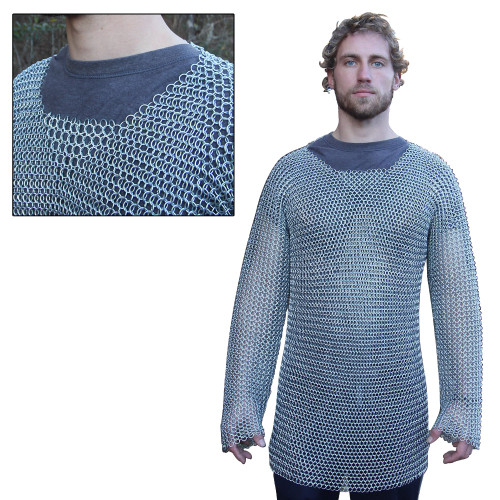 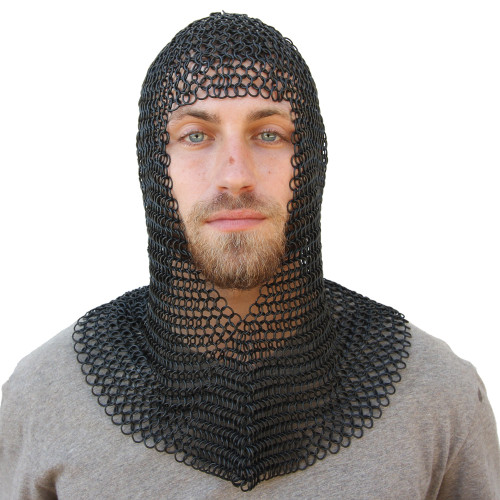 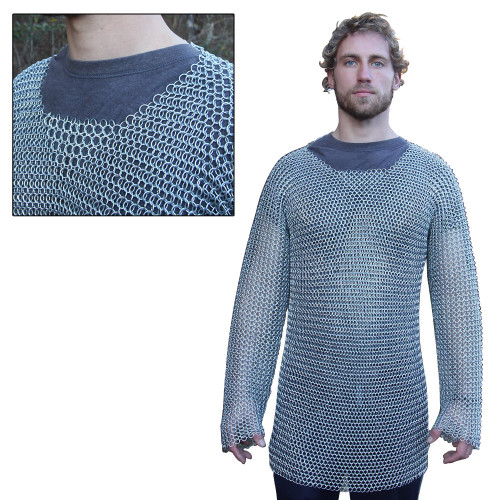