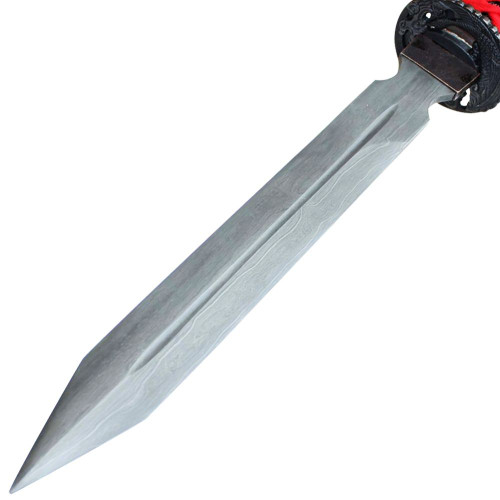 Yari is Japanese for spear or more specifically, the straight-headed spear. The yari was characterized by a straight blade at the end of a long shaft. Yari spears became much more valuable in battle than swords due to their significantly longer reach, lighter weight per unit length, and their great piercing ability. In the latter half of the sixteenth century, the yari became the main force in armies and when lines were formed they usually made up the second and third rows. The yari eventually became more popular than the longbow as a weapon for the samurai, and foot troops. When the Samuaru took to using the yari they trained in wielding it which came to be known as s?jutsu. This yari has a wooden shaft with a matte black finish. Both ends have a red cotton battle wrapped ito just like you would find on a Japanese katana. Underneath is faux ray skin with the bottom wrapping having a golden menuki. Just below the blade is an antiqued guard with a depiction of a crane. The Japanese crane is sacred and seen as a symbol of fidelity, love and longevity. The blade is made of Damascus steel that has a molting or banding pattern that is reminiscent of flowing water and serves a dual purpose of beauty as well as making the blade tougher and shatter resistant. Running down the center of the blade is a fuller to reduce the weight and help with balance. Included is a sheath to house the blade. The Japanese Damascus Steel Traditional Yari would make a great addition to any Japanese collection.